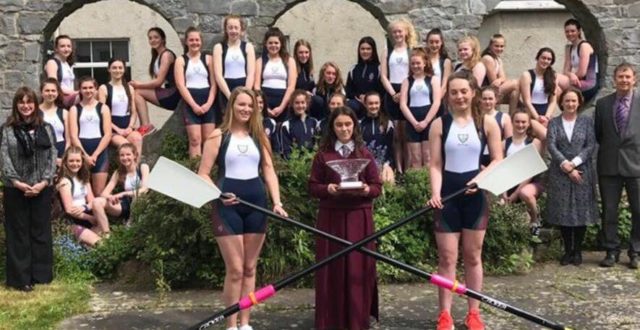 The biggest two day rowing event in Ireland took place last weekend in O’Brien’s Bridge.  This weekend of rowing saw a record breaking 904 crews compete in 400 races for the historic Limerick Regatta on Saturday and the 12th annual Schools Regatta on Sunday. With entries from both North and South Ireland counties, this event was just a dozen crews smaller than the National Rowing Championships of 2016 in the National Rowing Centre, Cork.

The noise on the banks of the Shannon River was deafening when Laurel Hill (with crew from both Laurel Hill Secondary School and Colaisté) were announced joint winners of the Irish Schools Regatta 2017 with a very worthy St. Colman’s College of Fermoy, Co. Cork. This is the first time a Limerick School has achieved maximum points and won the schools regatta prized Victor Ludlum Trophy.

The girls themselves deserve huge praise for a great days rowing which came down to the very last race of the day to win. The Laurel Hill crews were strong and showed such determination that they won the hearts of the crowd.

There are over forty girls involved in rowing between the two Laurel Hill schools; and over thirty of these girls competed for their school on Sunday. They rowed in all categories from Junior 14 up to Under 23. The early morning rows and late night gym sessions all paid off for these girls with their fantastic win. As Laurel Hill is a non rowing school they depend completely on the local clubs for boats and coaches on the day. Without the support of Castleconnell Boat Club, St. Michael’s Rowing Club and Shannon Rowing Club coaches and volunteers this day would not have been possible for Laurel Hill. The principals of Laurel Hill Secondary School and Colaisté have been hugely supportive of their girls, paying for the fees for boat entry and most importantly being there on the day to support their students all the way.

Of the seventy schools represented, three Limerick schools were in the Top 10.

Castletroy College was 4th , and

The large entry into the Schools Regatta  saw an increase of over 100 crews from last year and is a reflection of the work being done by Rowing Ireland in their Get Going..Get Rowing programme which is being rolled out to schools across Ireland and linking in with local Rowing Clubs.

The O’Donovan brothers Olympic Silver Medal in 2016 also resulted in hundreds of secondary school students discovering the benefits of the sport of rowing.