Amazing Inaugural #Blitzit 2017 on the water 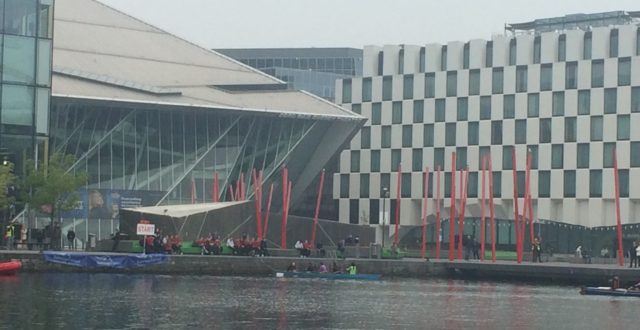 Rowing Ireland together with their Get Rowing partners Dublin City Council and Waterways Ireland are delighted to have held their first ever #Blitzit on the water at Charlotte Quay and the Waterways Ireland visitor centre on Friday 12th May. Over 300 students from all over the country traveled to the heart of Dublin city to take part in a “splash and dash” rowing event over 250m.

The event was staged in the Waterways Ireland visitor centre where students enjoyed fresh fruit and treats from Ready Chef, Glenilen yogurts and Manhattan popcorn. In the centre there was an ergometer warm up area and a photo booth where the students had pictures taken to bring home a great memory of the day.

This regatta is a culmination of the hard work and perseverance from Get Rowing eleven community coaches. Many of the competing students from the five Get Rowing centres who took part on the day had only rowed 1-2 times. The event was organised in line with the Department of Education Active School’s initiative that encourages schools to get students active.

In 2016 Get Rowing enabled 16,000 students to row on machines in a fun and active way as part of their school’s PE 4-6 week curriculum. The initiative would not have flourished without the funding of Dublin City Council, Sport Ireland and NUI Galway. In addition Carlow Youth services put massive resources into the programme to run it in Carlow town and county. Get Rowing has also grown from strength to strength with the assistance of partnerships with local sports partnerships in Limerick, Carlow and Cork as well as Active Schools flag and Healthy Ireland.

This was the ultimate finale for the initiative:  a day of fun racing creating a clear pathway for those who enjoy the sport to camps, clubs and beyond.

Speaking after the event programme manager Michelle Carpenter said “This event has finally given us the opportunity to lead these girls to the water to camps and clubs. We are delighted that Dublin City Council (Events, Sport and Well-being) together with Waterways Ireland have opened the way to showcase our programme on the waterways in the heart of the City Centre. We already have been approached by numerous girls wanting to join camps, clubs and learn how to row.  In addition,  community coaches and teachers have been buzzing with excitement from all participants during their journey’s home.