Plenty of Rowing on and off water for EWOS. As students support Irish rowers too. 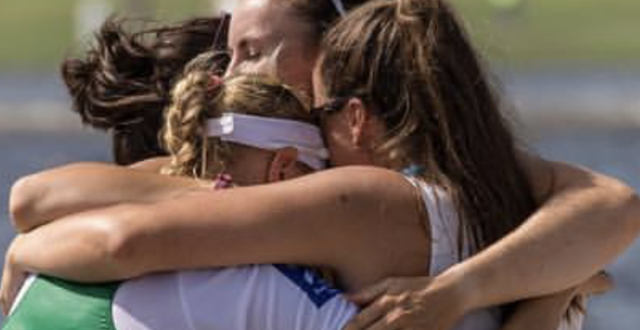 Get Going…Get Rowing had a busy European week of Sport with 100’s of pupils on the water in Dublin. In schools all around the country, however, there were more pupils rowing. From Skibbereen to Limerick, Dublin to Carlow and beyond students rowed. It was a big week for Rowing in Ireland with the World Championships starting in Sarasota, USA and it was fitting that students across Ireland engaged with Get Rowing community coaches to be play the Olympic Values programme which has been developed by World Rowing, with the backing of the Olympic solidarity fund and Youth Sports International. Rowing Ireland will be one of the first countries in the world to roll out to the programme to students across the country in Get Rowing centres. During European Week of Sport students in Skibbereen downed ergs for the day to watch their very own community coach Denise Walsh to compete in the finals of the Women’s lightweight single sculls, Denise already a European silver medalist claimed sixth place in the world.

On Sunday Get Going…Get Rowing brought the programme to Sport Ireland Family Sports Fest at the National Sports campus in Dublin. Over 2500 families attended the event and the Get Going..Get Rowing Coaches were delighted to engage adults and children of all ages on the rowing machines. At 3:57 everyone downed tools to cheer on Sanita Puspure who competed at the World Rowing Championships. Shouts could be heard giving Sanita support across the stadium .

All in all an active week was had across all area’s of the Get Going…Get Rowing programme not only were students involved on and off the water but they were encouraged by the fantastic role models in the sport. #girlpower #realwomen #womeninsport