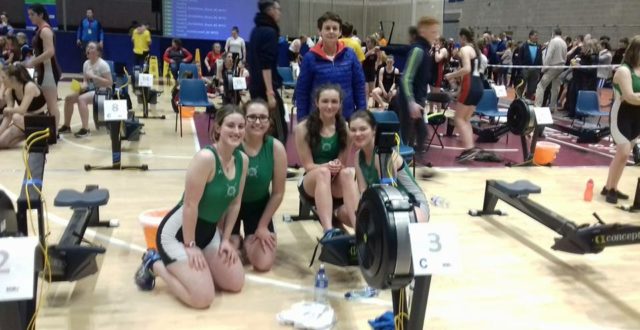 SUCCESS FOR GET ROWING AT IRISH INDOOR ROWING CHAMPIONSHIPS 2018

The Get Going..Get Rowing programme will shortly celebrate its fourth birthday and transition of new participants to the sport was evident at this year’s Irish Indoor Rowing Championships which took place last Saturday, 20th January at University of Limerick.

Get Rowers featured in the top three placings of the Women’s Junior 14 race. There were also some entries in the J18 category and many of the TrY rowing coaches raced in an array of events.

The women’s junior 14 relay event was won by Carlow Rowing club with Students from St Leo’s College/Gael Colaiste Ceatherlach, all of the crew are now new recruits from the programme to the local club. Aoife Hickson from St. Leo’s Carlow/Carlow Rowing Club came third in the WJ14 event.

Over 30% of the WJ15 competitors were from the programme, a mean feat considering that the Get Going…Get Rowing programme is only operational in some parts of the country. Get Rowers featured twice in the top four of this event with Evelina Zakarauskaite (Our Ladies College/Galway Rowing Club) in second place and Aoife Moloney (Confey/Commercial Rowing Club) narrowly missing out on a medal by 3 m coming in a brilliant forth position.

A great day was had by all on Saturday and rowers will return to the venue once again on Wednesday 7th March when the programme will host #Blitzit 2018, in conjunction with Limerick Sports partnership.

In 2017, Get Going…Get Rowing engaged 25,000 individual participants on rowing machines in it centres. The programme also partnered World Rowing to become one of the first countries to introduce the Olympic Values Education programme.

It was so rewarding to see the TY students from Carlow Rowing club become TrY Rowing coaches in 2017. These students were first years in 2014 who first experienced the programme and subsequently joined clubs. They have now have come full circle to become competitive rowers who are teaching the 2017/2018 first years to row and can also now give first-hand experience of the sport, what better way to learn but by peer leadership!

The programme will launch shortly in Cork and Kerry secondary schools with many more centres looking to come on board and join the participation in 2018.

The programme could not have come this far without of the support of the team at Rowing Ireland, Sport Ireland (Women in Sport and Dormant Accounts), partnered Clubs, Local Sports Partnerships (Dublin, Carlow, Limerick and Cork), schools, Third level partners and others such as Kathryn Wall and her team at Carlow Youth services have made the programme what it is today.

Of course without the tireless efforts of the Community Coaches on the ground the students wouldn’t be where they are today. The future is bright and we are looking forward to full steam ahead in 2018.