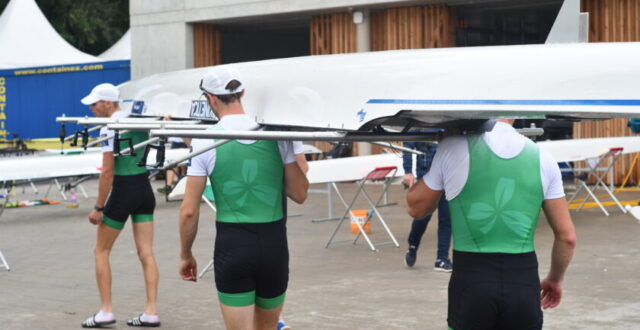 The Rowing Ireland team for the 2021 European Rowing Championships has been confirmed by Rowing Ireland’s High-Performance Director, Antonio Maurogiovanni.

Daire Lynch will be competing in the Men’s Single in Varese. Daire had a very successful 2020, winning Gold (U23 ERC) and Bronze (ERC) alongside Ronan Byrne. Daire is a member of Clonmel Rowing Club and is currently studying and rowing for Yale. Daire won five Irish championships (four singles, one pair) and previously placed 8th at the Junior World Championship. The Men’s Single can still qualify for the Tokyo Olympics at the Final Qualification Regatta in Lucerne.

Gary O’Donovan will be competing in the Lightweight Men’s Single. Along with Paul, Gary won Silver at the 2016 Rio Olympics and won a World Championship in 2018. Gary previously won Gold at the 2016 European Rowing Championships in Brandenburg and won Silver in 2017 and 2018. Gary won Bronze in the Lightweight Men’s Single in the 2019 World Rowing Cup III in Rotterdam.

Margaret Cremen and Aoife Casey will be racing in the Lightweight Women’s Double in Varese after winning the Silver Medal in the same category at the European U23 Rowing Championships last year. Margaret and Aoife have competed together for several years and won Silver in this event at the Junior European Championships in 2017. They finished second it the LW2x B Final at the 2020 European Rowing Championships in Poznan. The Women’s Lightweight Double Boat can still be qualified at the Final Qualification Regatta in Lucerne in May.

Lydia Heaphy will be competing in the Lightweight Women’s Single. Lydia had a successful 2020 after winning Gold alongside Cliodhna Nolan in the Women’s Lightweight Pair at the European U23 Rowing Championships. Lydia went on to finish first in the B Final at the Senior European Championships in October.

Sanita Puspure will not be racing at the European Rowing Championships and will be travelling with the team for training camp to compete at later competitions.

A total of seventeen athletes will be representing Ireland at the 2021 European Rowing Championships in April. The team have been training together over several months in the National Rowing Centre in Cork. Alongside the Senior Athletes, there have been additional athletes training with an eye for the U23 and Junior World Championships this year and looking forward to the Paris Olympics in 2024.

Alex Byrne, Ross Corrigan, Jack Dorney, John Kearney, Alison Bergin, and Holly Davis have all been training with the senior team and supported the European Championships’ preparations. These athletes have worked hard throughout as the team prepare for Tokyo and for Paris 2024. Para-athletes Katie O’Brien and Steven McGowan have been training with the High-Performance Team in the National Rowing Centre. They will continue to train alongside the Senior Team over the coming weeks.

“We are very happy with the team selected for the European Rowing Championships next month. A lot of hard work and preparation has gone into the camps, and I want to thank the athletes, coaches, clubs and their families for their continued support.

We are now looking ahead to another successful year and to build off the success of the last number of years. The athletes have all shown their dedication and commitment to our programme, and we look forward to competing and representing Ireland.

All the races will be covered on Rowing Ireland’s Social Media Channels;